A Media Future? How Nonprofit Journalism Offered Me a New Chance 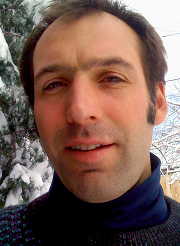 As with all proper born-again tales, the resurrection came with a sudden clarity of vision: The potential nonprofit foundations and the Web hold for journalism. I was blind, a reporter who refused to read blogs. And now I see.

I see what an optimist might describe as the productive foment of creation: Journalism branching out in every direction, moving in starts and fits and pure chaos as it reinvents itself.

Or maybe the more correct view is that old school media is out chasing its tail, wondering what mix of webcasts and video and blogs works, while other organizations and influences are taking off with the craft?

After all, while reporters in just about every print newsroom fret about buyouts and layoffs, staff at ProPublica are out doing top-shelf reporting on drilling and endangered species.

And during the '08 campaign, who among us did not ditch the Washington Post in favor of Drudge, Politico or fivethirtyeight?

Marla Cone, the veteran Los Angeles Times environmental health journalist and former SEJ board member, is now my colleague at web-based Environmental Health Sciences; she and I have been freed to go find big, interesting, untold stories in environmental health and climate and report them. Our outlets now are web feeds that go out daily to thousands of sites worldwide. We've got funding, a platform, and – thanks to the proliferation of blogs and websites across the Internet – the daunting task of getting our stories to stand out amid so much noise.

I won't waste ink dissecting the nature of this trend or how organizations like McClatchy or even SEJ can best react; such insight must come from sharper pencils than mine. Though I will second Bill Souder's insight, shared on the SEJ-Talk listserv, that this transformation is not looming: It has arrived.

Hearing journalists call this a "crisis" brings to mind a conversation I had once with a Massachusetts Institute of Technology professor who studied industrial shifts. He said status quo companies never or rarely make the transition to new technologies. They simply can't see beyond their current model and miss completely the paradigm shift.

We were talking about PCBs, and how Monsanto couldn't see beyond chlorinated chemistry in the '70s when problems with the compound became apparent. But I'm thinking the same could be said for newspapers today.

There's also the old saw: When others are frozen with fear, take a step.

Only I didn't so much take a step as get pushed. I never intended to join the revolution; a year ago, I thought my journalism career was drawing to a close.

My newsroom at the Oakland Tribune was gradually turning sour – embittered by buyouts and a union fight and knowing that with every departure another beat would go uncovered. It was a dangerously contagious mood, and I began to wonder if the frustration and uncertainty of journalism made sense anymore. I'll admit that, with two small children, the money, hours and stability in the press office of a university or government agency were looking attractive.

Then my wife finished her degree at Berkeley, picked up a fellowship in Boulder, Colo., and I needed a job. The Denver Post, Dean Singleton's flagship paper, offered a spot on the editorial board. It was a plum post, full of responsibility and influence. But the terms were frustratingly disappointing.

I took a deep breath and told the editor his offer made me fearful for both my career and our profession. He countered this was the best he could do; that in an era of layoffs and cutbacks, I was lucky to have a job.

And so with little to lose early one Sunday, I called Pete Myers, a scientist who started Environmental Health Sciences in 2003. His daily aggregation of global science and journalism, often put together in those early days from a coffee shop in Charlottesville, Va., had become an invaluable tool as I covered the environmental health beat. We talked for a few hours about where he wanted to take his organization, the excitement he's hearing from funding sources, and the potential for us to reinvent journalism. Somewhere in there he offered me a job.

I got off the phone with my head spinning and e-mailed to clarify whether that offer was real or theoretical. Real, he replied immediately. Six hours later he asked for a résumé.

Today I spend about half my job mining the Web daily for the best, most interesting and relevant journalism on climate change. I grapple with the same questions as everyone else: Who's a journalist? Do I post a good story, even if the publication carries a tinge of advocacy? When does a blog post carry the same weight as a reported article?

The other half of my job is what I find most rewarding. Marla and I are pushing each other, trying to fill the gaps in coverage and get great stories to our readers. I want to beat not just the major papers, but ProPublica and NRDC and RealClimate.org.

We're feeling pressure, no question: Our funders expect us to be out there furthering the public discourse, expanding coverage on key areas, distributing accurate and unbiased information to the public. In that respect my job is no different from my task at the Tribune.

The downside, of course, is that I no longer have a voice in a mass-media publication. I've gone from reaching 750,000 at a sweep to maybe tens of thousands. Worse, you have to be interested in climate change to find my stuff.

Jim Detjen, founding president of SEJ and director of the Knight Center for Environmental Journalism at Michigan State University, is quite concerned about this polarization of news. "We're losing the middle ground," he told me. "To some degree, it's the same thing we're seeing in society."

The good news is that's changing.

In mid-November The Denver Post ran an A1 story investigating water quality problems caused by fracturing rock deep under oil and gas drill sites. It was a piece any journalist would want to own, offering damning evidence that the government's health assurances favored industry over the public.

It was a story the Post or LA Times of yesteryear would own. Except that the byline on that story belonged to ProPublica's Abrahm Lustgarten.

That's our business model: Use our funding to do quality reporting on important topics that mainstream outlets aren't covering. Then get those stories in those papers – and inspire other reporters to find local or similar angles.

I can't say this is the answer to journalism's woes. Not even close. Nonprofit, foundation-funded journalism won't absorb all the reporters fleeing old-school institutions. Funding is limited. There is the polarization of news that worries Detjen and other deep-thinkers. And there's that question of bias and credibility that dogs any upstart and that can only be overcome with long, hard, good work.

But I'm excited to still be a journalist. Excited to have the opportunity to do big journalism on interesting topics and get it out there, even if the "there" is rather limited right now.

Douglas Fischer edits DailyClimate.org, a website published by Environmental Health Sciences. He has been a member of SEJ since 2000.